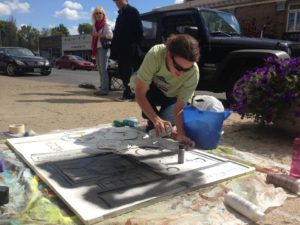 On September 16th, I’ll participate in the Art Squared event Masterpiece In A Day (MIAD), a six-hour long art competition as part of a larger festival. I have to start from scratch and finish my painting by 3pm.

I look forward to it.
I relish it.

In Indy, the Mini Marathon, a half-marathon, kicks off the month of May and the lead-up to the Indy 500. This is my Mini Marathon.

I think about what I want to paint ahead of time, mapping out each step in my head. When it comes time to paint, I just execute. I know what I’m going to do…I’ve already done it in my imagination 100 times.

The night before, I pack my gear, I double check, I get my brain centered. I don’t carbo-load, that’d be a step too far, but I do make sure I have water for myself and my brushes. Devices charged? Check.

If MIAD is my Mini-Marathon, courtroom sketches are the 100 meter dash.

I recently was tapped to draw the courtroom sketches for the Buster Hernandez, AKA “Brian Kils” case in Indianapolis, for WISH-TV. It was a federal case, as that Hernandez (no relation, I swear) allegedly did his dirty work in California. Indiana has a no-cameras-in-court law, but so do the feds.

This wasn’t my first opportunity, I’ve drawn for WISH a few times. I’m also a news photographer there, so, really, this is just another newsgathering technique for me. I’ve covered the Desmond Turner case (the “Hamilton Ave. Murders” in Indy), the trial of the “Richmond Hill Explosion” mastermind, and Jared Fogle’s trial, as well as Tim Durham’s fraud case. Each court appearance has been a different experience. 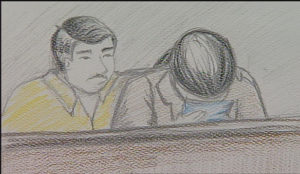 Desmond Turner had a bench trial, and I was the only sketch artist and this was my first attempt at courtroom sketching. I sat by myself in the jury box, and the judge treated me with amusement. He said he didn’t want to look like Jay Leno. He got Keith Olbermann instead. Turner, himself, was tough to draw. I couldn’t get his eyes right, and it was very unsettling. The drawing I’m most proud of was of the grandparents of two little boys killed in the attack.

Seated in the gallery, the grandmother broke down into sobs. I looked over and her husband patted her back to soothe her. He looked like my grandfather. I did a mental snapshot and immediately began sketching what I saw: The top of her head as she bent over, her face covered with a tissue, his look of concern and his hand reaching over, the colors of their clothes. The grandmother was removed from the gallery in a wheelchair and my colleague caught video of her in the haul. Between my image and his video, we told the story of this family and the emotional toil of their little boys’ autopsy readings. 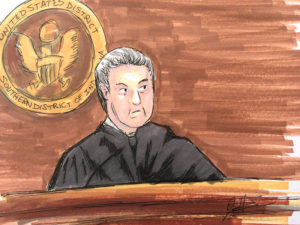 The judge in the Buster Hernandez hearing. (WISH)

I’ve never been formally trained in courtroom sketching, I just rely on my personal skill as an artist (sometimes with questionable results–I’m not proud of the Fogle drawings, something about him was very tough for me to draw).

I treat each opportunity as a long-form version of video newsgathering, something I’ve done for almost 15 years. I look for images that will tell the story of what’s happening, the difference being that it takes a lot more time to capture that image with a pencil than with a camera. 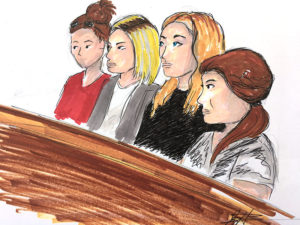 In the case of Buster Hernandez, there was a group of teenage girls from the high school that Hernandez allegedly terrorized in 2015. I wasn’t sure if they were the girls that he was exploiting or just concerned citizens, they told us afterward that they were the latter, but I drew them all the same.

I arrived during the hearing prior, and the judge was the same. Hearings, especially, can be very short, truly sprints, so preparedness and strategy can be even more important than the half-marathons of a MIAD.

I’ll work on a few sketches simultaneously. I roughed in the judge during the early hearing, flipping between him and the girls, as I could see them in between people moving. Pencils first, capturing values in shading. Colors will come later.

Previously, I drew with color pencils and pastels.

Pastels can get messy, but they cover quickly. I also usually end up looking like I was working in a rainbow coal mine. Other artists may use watercolor paint, but I can’t see myself handling the need for water carefully. There’s a feeling of being a fly on the wall, you don’t really want to call attention to yourself. I even cringe while sharpening pencils. 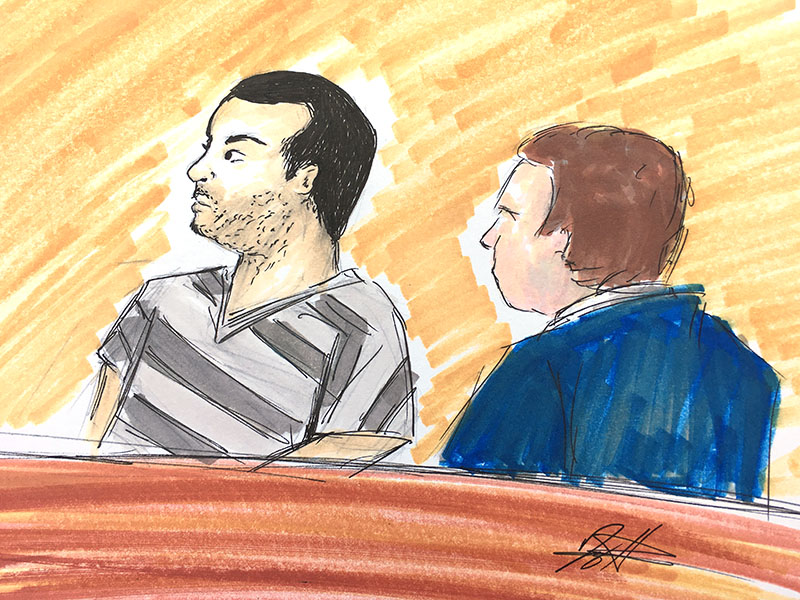 Buster Hernandez and his attorney at the Indianapolis hearing. (WISH)

I had also drawn on pastel paper, but was always frustrated with the loss of detail once I began shading. I never felt like I had enough time to get dimples in, or those other little features that made someone look like themselves (that’s probably why it was hard to draw Fogle–he was very doughy and what detail there was, kept getting lost).

For the Buster Hernandez hearing, I went out on a limb: Markers and bristol board. I’m sold. I’m never going back. I just had to remember to leave the white, white, to kind of reverse shade compared to what I’m used to, but I could keep those little details I kept losing.

When they lead in Hernandez, he had an arched eyebrow, almost a smirk, like he was soaking up his moment. Almost mischievous, he looked like he was thinking, “Yeah? What are you gonna do about it?”

This was our first look at Hernandez, since no mugshot had been released. This image was the reason I was there. I wanted to capture that face, but he kept moving, so I settled on a profile with his unshaven neck and his focus on the judge.

The hearing lasted about 15 minutes.

All of my sketches leaving were in pencil, lines I soon darkened with black ink. I had the rest of the markers in my bag and began coloring as I hurried out. I was even coloring while taking the elevator down.

I sat on the courthouse steps and finished up my images. Timing and speed was the key. I knew both sides of the coin: The artist’s need to make it look right, but also the newsperson’s need to get these images out there as soon as possible.

At the Richmond Hill trial, I was able to complete several images before we broke for lunch (this was an all-day session). There were no in-and-outs while court was in session, but as soon as the doors opened, I ran out and handed off what I had drawn. My reporter took photos on her phone and sent them back to the station. A competitor realized that his sketch artist hadn’t grasped the immediacy of newsgathering and ran in to shake down that artist for drawings.

It’s not supposed to be a competition like that, but I did smile a little. I was ready. I was prepared.

This is the finished piece, showing how the sketches are zoomed in, or as a whole. There’s a few shots of me, inking the drawings on the steps outside. Even the process of sketching can become part of the visualization of the story.  (WISH)