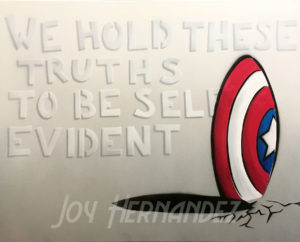 I feel like I taped my eyelids open for five days straight and stared at cable news.

In reality, I binge-read about a year’s worth of Captain America–both Sam Wilson and Steve Rogers.

After 25 years of comic book consumption, life has somehow gotten in the way, and I got way behind on my monthly reads. Some books I really look forward to (Ms. Marvel? Check!) and they moved to the top of the stack…The Captains America? I don’t know why but I just didn’t get to them.

I’ve always been more of an X-Men fan, and tried to draw a budgetary line-in-the-sand at the Avengers. But there’s crossovers and events, and I’ve always liked Cap. Integrity, fortitude, Cap will always do the right thing.

I LOVED the first Civil War event. It was an allegory to our post-9/11 world and the Patriot Act, and I got it. I was on Team Cap all the way. I was picking up what they were putting down in terms of the grey areas, but I’d made up my mind. #TeamCap

And then they killed him.
(Spoiler alert! No. No spoiler alerts for ten-year-old comic book events).

It took me a while to even think about reading another Cap. He was supposed to be dead! They made a big deal about killing him! Dead like Uncle Ben! Then it would mean something, right? Right.

Anyway, we’ve been on crossover event after crossover event, and I’ve got the fatigue. Civil War 2 left me unimpressed (and added to my lag on reading issues; in fact, I just plain skipped many). I shrugged through the whole Pleasant Hill thing. It seemed hard to follow. I liked where some things shook out, I liked the X-Men coming back into the fold after the Inhumans cross, like, yeah, let’s finally get back to some books.

An injury left me stuck in a chair for an evening, and TV left me with nothing to watch. Comics it was. I grabbed the Caps and went for it. I hadn’t lived in a bubble this last year, I knew the uproar over the title. I knew about “Hail Hydra.” I knew about the Cosmic Cube.

Much like the Civil War was an allegory of a decade ago, a decade from now (if we haven’t blown ourselves up) this story line could be looked back at as a time capsule. Marvel hasn’t shied away from these tough issues (just like they hadn’t in the past), and retold what felt like a very familiar story, played out by capes and spandex and super-human strength.

It sucked in the month-by-month, these story snippets coming down the pipe, but binge-reading was the way to go. This was what the last year was pretty much about (and kind of unnerving when you stop to think that Marvel’s production line is about three months or so ahead of the dates. They just about had a crystal ball feel going on there).

Steve Rogers Cap is America, he’s still America, but he’s America in a very dark place. Because we are in a very dark place. It may make us uncomfortable to see it, to read it right there in print, drawn up in symbols and stand-ins, rather than on a page of our favorite news sites, but, we can’t turn away. Hiding won’t make the bad things go away.

And, through the course of Secret Empire (at least as far as I got: roughly issue #7), it was high time for the Avengers, the heroes to come to terms with that as well. Hiding in their mountain wasn’t going to make America better. Shrugging a nice little “it is what it is” wasn’t going to stop HydrAmerica. Actively remembering who they were and what they stood for, and remembering to do what they did best and why they did what they do best, that’s what was going to get our heroes out of this jam.

Steve Rogers Cap is America, the big, top-down notion of it, and how easily it was tainted and warped into something horrifying. Sam Wilson Cap is all of us.

I loved Sam Wilson’s run leading up to Secret Empire. It felt so familiar. The sense of hope, the sense of a lack of hope, the burdens and conflicts. I hesitate to say it felt “real,” but only because this is a comic book, unfortunately. If it was a novel, it wouldn’t feel so weird to say that, but, hey, comics aren’t just kids’ stuff and haven’t been for decades.

During Secret Empire, Wilson has felt disillusioned. He feels he sucks at being Captain America, everyone hates him, everything he thought he stood for has been rejected or stood on its nose, so he’d rather just go retreat somewhere off-grid and say “to hell with it.” You know, like declaring you’re going to move to Canada. What’s even the point of voting. Who cares. The “Machine” rigged it. Or something like that.

Then he starts to see how he can help people, getting the ‘little guys,’ the average Joe’s overlooked in a land of super heroes, to safety. The people that will really be hurt by authoritarian policies. And then he’s called back into service. He’s the Cap we need. He’s the American spirit. He’s all of us.

How does this turn out? Dunno yet. I’ve got some more catching up to do. How does 2017 turn out for the USA? Great question, too bad we don’t get solicits a few months out for real-world events like we do for comics.

But do we shy away from telling the story because it makes us uncomfortable? Hell no. Steve Rogers, in the aftermath of all of this (when he’s inevitably switched back by the Cosmic Cube, like you didn’t see that coming) will have a ton of soul-searching to do. He will ask himself how could he have done these things? How was he even capable of these horrific actions? What does this even say about him that this could be deep down inside of him? How will he ever come to terms with what he did?

And so will this country.

Comic books have the optimism of, hey, “Dead Like Uncle Ben” is the rarity. We know Steve Rogers is going to survive this, because Marvel couldn’t even bring themselves to kill him off a decade ago (and, solicits). So it’s like a colorful “We’ll get through this.”

But when we do, in reality, we also are going to have quite a bit of soul-searching to do, and it won’t be pleasant or pretty. But it will be inevitable.