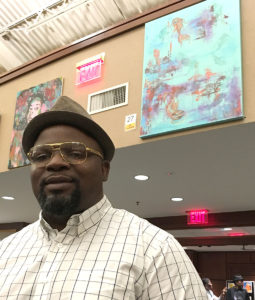 Omar Rashan’s friends cheered him on as he accepted the Best of Show award at Flava Fresh XIV, at the College Avenue Branch of the Indianapolis Public Library. His friend and colleague, Latoya Marlin, had just taken the Committee Choice award.

His friends weren’t just cheering on his victory, his victory was their victory. Together, they formed WE ARE Indy Arts, a collective of roughly a dozen African-American artists making their presence known in Indianapolis.

“Some of us are up-and-coming, and some of us are fresh out of college,” said Rashan. “We are trying to create more opportunities for minority artists, because we felt there wasn’t an outlet for it, or a pilot set for it.”

They saw a need, and they fulfilled that need.

Rashan described the group as ranging in age from 28 to 55. They count as elders former members of INDY Renaissance, a nationally-known African-American artist association.

Many of the current artists met through the RAW Natural Born Artists monthly shows, part of a chain of shows through a national parent organization. Catering to emerging artists, RAW is part pop-up art gallery and part music venue, and teaches artists how to polish their presentation and connect with a wider audience. For Omar, RAW felt like stepping stones, a process of leveling up. They took their cues from their mentors, but looked hungrily toward the future they envision. 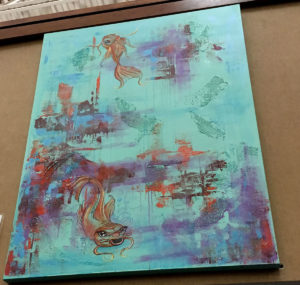 “We see what’s going on. We see the culture happening every day on a ground level, so we were like, look. A lot of us are educated. A lot of us have great backgrounds and skill sets. Let’s just come together and let’s make some noise, and let’s disrupt what’s going on in the city,” said Rashan. Disrupting, he added, was “to be a purple cow in a pasture of black and white cows.” WE ARE Indy Arts aims to stand out and get noticed.

In the midst of their disruption, however, the cooperative understands that there are still rules and expectations that should be met. Omar stressed the need to understand the proper etiquette of showing artwork, or understanding the politics of the art world. “You know, a lot of us are young; a lot of us will take risks. We don’t care, we’ll disrupt, but then, at the same time, you still gotta respect other–not really the culture aspect of it–the nature of how things need to be done.”

Part of that disruption, Rashan feels, starts within their own home and culture.

“One of the things we’ve seen in our culture, too, was like, we felt like we didn’t understand the value of art,” said Rashan. “The ones who’ve been educated, went to school, or have an extensive background in the art field understand that. But, why aren’t the people that look like us buying our work? What we start finding out is that it’s a lack of knowledge; they don’t understand.

That’s what we want to implement back into the community: Educating them on the value of it and letting them see what the long term is. Show them what other cultures have done, so they can understand, like, look. This is your chance as well. You’ll see the ones that are going to benefit from the things they’re trying to put in front of you.”

WE ARE Indy Arts supports its member artists, showing up and cheering each other on at events, hosting member-only group shows around downtown Indianapolis, and by “knowledge swapping.”

“Knowledge swapping” is supporting each other by playing to their individual strong suits. For example, some of the younger artists have a stronger grasp of social media and can use it to their benefit and to the WE ARE Indy Arts brand’s benefit. They guide some of the less adept artists, who, in turn, use their skills to supplement what the other artists may lack. Rashan calls the artists “creative hybrids” who are skilled in various media, including 3D art, ceramics, and jewelry making, along with painting, drawing, and other 2D work; offering up different backgrounds of expertise.

“In this last big show that we had, ‘Black Hollywood,’ which was a great success for us, at the (Indiana Landmarks Center),” said Rashan, “we had to come together collectively, so we were forced to have to talk about the subject matter and be on cue with each other. That was a different feeling, because we’ve only been in existence for two years. That was that change like, ‘Okay, we’re in synch. We know each other now, so let’s just keep doing more of this.'”

Under various iterations of their name (“We Are 2.0,” “We Are Indy,” and “We Are“), the group has organized group shows in show spaces around Indianapolis. Some are classic stops on First Friday, but some, such as the Flava Fresh show locations, are a little off the regular path, and open up art to new eyes. An upcoming holiday show, located at 30th and New Jersey St., just north of downtown Indianapolis, feels like the next step, continuing their inertia, and WE ARE Indy Arts will show up for each other and to introduce themselves to a whole new audience.

“The following is real, it’s authentic, it’s grass roots, and we’re doing all the right things that we should be doing. As a group of people who have great ideas, you know, it’s still a slow grind, but its like man, what’s next? We’re always excited about the next move and we’re always keeping the youth in our mindset, on how we can get them involved.”