Every year, since 2014, Kewanee has gathered and danced.

The idea originally stemmed from the wave of “Happy” video parodies; Pharrell Williams wrote a song that made people smile, and everyone one from Tehran, to London, to Indianapolis danced along and made their own version of the song, with an appropriate hashtag. Kewanee, Illinois, joined in on the fun and #KewaneeIsHappy was born.

Strangers got together, danced with sometimes questionable talent, and always without a care as to who was watching. They had so much fun, they demanded to do another video.

They got down to “Uptown Funk,” by Bruno Mars, in 2015, and “Can’t Stop the Feeling,” by Justin Timberlake was almost the too obvious choice for 2016.

2017 had a different vibe to it. “Despacito” was the song of the summer, but translated, the lyrics where too much about sex (the other no-no disqualifier is drug references) for little kids to be involved. With so much drama around the country, it seemed like no one was in the mood for a happy song. 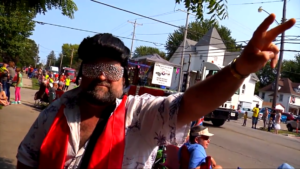 Kewanee switched it up, with a soon-to-be revealed MC Hammer parody, “Farmer Time,” and a parody of “Ain’t No Man,” by the Avett Brothers. “Ain’t No Man” had a ‘keep your head high’ toughness to it, that embodies the town, a Rust Belt regional hub that saw its share of disheartening, worrisome, or just plain strange headlines in 2017.

The video takes place during the annual Hog Days parade, with citizens mugging for the camera. Some are more willing than others, some are goofier than others (and then there’s Elvis). No one is dancing, but everyone is showing their real face and their real heart, however heavy or light it may be. Some of the participants are known, some are strangers (as is the case with all of the town’s videos). They are all willing to check their shame or self-consciousness in an effort to promote their town, named in 2013 as Rand McNally’s Friendliest Small Town.

In a time of changing fortunes, they figure creativity can be part of their solutions.