It was just another Sunday at Roberts Park First United Methodist Church in Indianapolis.
Sunday morning church services had wrapped up and lunch had been served.
It was time to bless some animals. 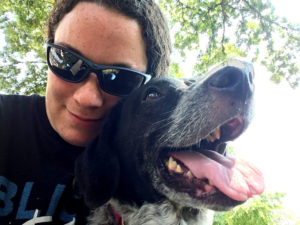 Ceni is happy to be blessed (and to get ice cream).

I’d gotten my pets blessed over the years. Dottie was an Episcopalian, Remy is Greek Orthodox, and now it was Ceni’s turn; she would be Methodist.
(Rooney hates cars and public appearances, and joined the Fifth Church of Ceiling Cat all on his own).

As we headed to the downtown church, we saw a poster board sign under a train overpass. It was hard to read in it’s placement. Driving by quickly and threading the needle of support columns, all I could really see was that there are about 2,000 homeless people living in Indy. (Just downtown? Or all over town? I couldn’t really tell, but this study leads me to believe the poster was referencing downtown).

The blessing service was held on the church’s south lawn, under the shade of a big old tree. The attendees were a mix: Millennials and their smaller dogs, aging Boomer congregants, and various homeless or “food insecure” friends that had just had a meal, courtesy of the “Soup’s On” program at Roberts Park. “Karma Chameleon” blared from a DJ near an ice cream serving station (complete with doggie-friendly ice cream cups).

The regular mix of downtown life.

The bulletin for the service.

“It’s something we wanted to try to do,” said Richard Smith, a congregant since 1963, and now church staff member, “to touch hands with our community around us a little bit more, to have an opportunity to reach out in our community to some folks that may not be familiar with our church.”

His wife had been a member of Roberts Park since she was seven years old, and he was happy to see the large green space used so well, as there wasn’t so many green spaces in the downtown area any more.

Associate Pastor Melissa Kleinschmidt said that “Soup’s On” feeds 230 to 250 lunches every Sunday, and the church’s daycare serves about 75 children regularly. Having this first annual Blessing of the Animals seemed like a logical step in trying to reach out to some of the newly-minted downtown residents.

“We are in a position where we often see animals walking by,” said Kleinschmidt. “We see a lot of people downtown with their animals and walking by the church, so we thought it’s a great opportunity to not only just praise God for all that God has made, but also to get to know our neighbors a bit better.”

“Someone mentioned that there are probably more people downtown that have dogs than children and we thought, for as many dogs as we see, that’s probably true,” she added. 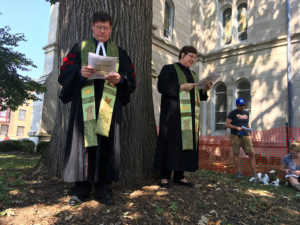 Kleinschmidt was wearing a special stoll this Sunday with her vestments, green for the time between church holidays, but decorated with cats and dogs and turtles. The retired Rev. Dr. Ann Glass had made the stolls by hand for the special day, one for the Associate Pastor, and one for Pastor Andrew Scanlan-Holmes.

“God created all living things, and so all living things are sacred,” said Kleinschmidt. “We know that animals bring not only value to our lives in a lot of different ways, but pets especially bring so much to people’s lives in the way of providing fellowship and friendship and relationships. Sometimes, it’s the primary relationship for someone, and we certainly don’t want to belittle that. I personally believe that God welcome’s all of God’s creatures into heaven.”

At that point, a man approached the associate pastor and shows her a set of keys. He thanked her and Pastor Andrew Scanlan-Holmes for praying for him–he’d just secured a place he said. He hoped to keep it. He wanted them to keep praying for him, and then he went on his way.

We talked about the dogs during the service. One Jack Russell terrier was wanting to give the sermon himself, via his barks. His owner had tried to shush him, but he was squirmy. We talked about how, in Matthew 9:14, “Jesus said, ‘Let the little children come to me, and do not hinder them, for the kingdom of heaven belongs to such as these.'” (NIV) 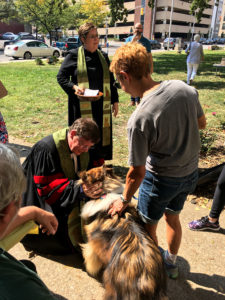 Rev. Scanlan-Holmes blesses a collie brought by a F.I.D.O. volunteer.

Kleinschmidt felt that the dogs barking reminded her of children babbling or crying during her sermons. They were the future of the church, and she was seeing more young families live and work downtown. She described the “spectrum of life,” from babies to the elderly in her congregation. “It’s a lovely thing.”

Choir Director Jason Fishburn wasn’t born into the Methodist Church life, but came to it in college, drawn by the opportunities choir presented. This was his fourth season at Roberts Park, and he echoed the sentiments of outreach.

“It only makes sense to reach out to our neighbors. This is just one way to connect with our community. God put animals in contact with us or together with us so that we can be companions or to make us happy. I think there can be more connection, greater community…I think…Churches are slow to change…”

While Fishburn was describing some of the future events planned by the church (including “Wine and the Word” on October 4th at the nearby Athenaeum), Liz Goodall approached with her poodle, Quincy.

“Do you have this every year?” she asked.

“Cool! This is Quincy, he got God’s blessing, he gave a little donation, and now he’s good to go!” Goodall lives on the north east side, in an area often targeted for crime prevention measures. She’d stopped by Roberts Park during other outreach programs and picked up a flier for this event. She had also asked for a prayer for her other dog, Vinnie, who was ill.

The event was winding down, and it was time to go home. It was 85 degrees and Ceni was getting hot.

As Goodall, Fishburn, and I were wrapping up our conversation, a visitor ran up and asked if we’d seen a little, white, fluffy dog named Zo. She’d gotten loose while her family was packing up to leave. Church members turned their attentions to finding little Zo. Ceni and I patrolled around, asking some kids in rock band shirts, sitting out by a nearby restaurant, if they’d seen Zo. No, but they’d look, too.

We continued to look as we meandered to the car. All around us, homeless parishioners, hipsters, Millennials, Boomers, and congregants wandered around, looking under cars and around bushes for the dog. A shirtless Gen-Xer with wrap-around sunglasses rollerbladed up the Cultural Trail, and a young woman with all that she owned in rolling suitcases tugged on the door of the Women & Children’s shelter of the Salvation Army a block north of Roberts Park.

This little church had seen the downtown area change over the decades, and is determined to play a part in every aspect of it.

UPDATE: Zo was found! She was safe and returned to her owner with a blessing.